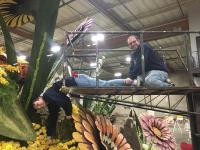 In 2003, when Alicia and Chase were still dating, OU went to the Rose Bowl. Every year since then, Alicia has longed to go to the Rose Parade and help work on the floats. Chase promised that if OU ever made it to the Rose Bowl again, they would go.

For many years, there was no chance of OU making it to the Rose Bowl due to changes in the industry. But finally in the 2017 season, the rules changed and there was a chance! Even before OU had been selected to go to the Rose Bowl Game, Chase put his plan in place to create the trip of a lifetime.

Chase had already researched organizations through which you could volunteer to work on floats and selected Petal Pushers through Lutheran Hour Ministries. He filled out their volunteer application online and prepared to wait. The application said it could take three weeks to be processed, and they only accept 500 volunteers out of about 2,000 applications. He submitted their application under the LilyGrass Flowers and Décor name, and it was approved in less than ten minutes.

He called Alicia and told her not to check her email until he got to the shop, since the notification email had gone to the LilyGrass email address. He took lunch to the shop and told her that her dream of working on a float was soon to become reality. Alicia Started crying immediately! They booked their flights, bought tickets to the football game, and off they went.

Volunteer shifts to work on the floats start about two weeks prior to the parade, and early shifts involve placing seeds, dried flowers, and other items on the floats. Alicia and Chase volunteered for the final eight-hour shift, which is when all of the fresh flowers that require a water source are placed. The eight-hour shift wasn’t enough for Alicia, so they worked from 4 p.m. until almost 4 a.m. on two different floats.

Volunteers prep the fresh flowers by placing them in water tubes with a sharp point at the end. The prepped flowers are organized in sheets of 500 flowers each. Some volunteers spend their entire shift filling water vials and tubing the flowers, while others place the flowers on the float. The floats have a hard foam backing painted with colors, so it’s simply a matter of filling in those spaces with the right flowers and colors, similar to a color-by-number painting.

When work was finished on the Luthern Hour float around 11 p.m., Alicia went in search of another float that needed help. While volunteers from all backgrounds help place the flowers on the floats, each float also has floral designers responsible for large bouquets and designed floral elements to accent the float.

Typically, floats are decorated from the top down so that volunteers can stand on the bottom portion of the floats to decorate the top. But Alicia found a float where things had gotten a little out of order, and the large floral displays in the middle of the float still needed to be done. The assigned floral designer had a plan for the arrangement but wasn’t able to access that portion of the float. With the help of some scaffolding and Chase volunteering to hold her feet, Alicia hung upside down over the middle of the float to finish that arrangement. That’s dedication!

After a long night of placing flowers, it was time to find their seats and watch the parade. They had purchased seats about a mile and a half from the starting line, which means it took the first float an hour to get to them. Alicia watched on her phone until it was time to see the floats in person. Every year, Alicia records every channel that broadcasts the parade so she can go back and listen to all the different stories and commentary and see every possible angle. Watching the parade in person was a dream come true!

After the parade ended, they walked about four miles to the stadium for the football game. It was a busy and exhausting few days, but it’s an experience that Alicia and Chase will never forget.

Watch the News 9 interview with Alicia.