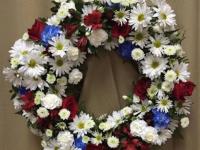 While Memorial Day for many people means the start of summer and a time to gather for food and fun, the purpose of the holiday is to honor those who have lost their lives in service to our country. From its beginning, the holiday has been closely tied to flowers as well.

The origins of Memorial Day in the United States dates back to ceremonies honoring those who died in the Civil War. In 1868, a leader of a veteran’s organization called for May 30 to be Decoration Day, a specific day set aside to leave flowers or other decorations at the graves of soldiers.

More than 20 towns in the northern United States claim to be the birthplace of Decoration Day, but only one town has received federal recognition as the origin of this special day. In 1966, a decade after the town of Waterloo, New York, closed businesses for a community-wide celebration, President Lyndon Johnson signed legislation that declared Waterloo the official birthplace of Memorial Day.

Decoration Day continued to be observed as a Civil War commemoration for many years, but the holiday evolved during World War I to honor those who died in that conflict as well. It continued to be observed on May 30 until Congress passed the Uniform Monday Holiday Act, which made Memorial Day the last Monday in May and declared it a federal holiday. That change went into effect in 1971.

The long-standing tradition of Decoration Day continues today, as many organizations and individuals take time to decorate graves of military personnel with flowers or flags. In Washington, D.C., there’s a special ceremony to place a wreath at the Tomb of the Unknown Soldier and flags are placed at each grave in Arlington National Cemetery.

Communities across the country also observe Memorial Day with parades and community events to remember and honor those who lost their lives in service to our country.

Thank you for serving me, my family and the United States of America.  You will be blessed in heaven.