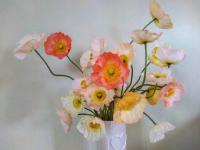 Poppies are herbaceous blooms with colorful, translucent petals atop slender, leafless stems that are covered in delicate hairs. Often associated with remembering fallen soldiers, poppies are popular blooms during the month of May, which celebrates American Legion Day, Poppy Day, and Memorial Day. The symbolism for lost soldiers comes from a battle of trench warfare in the poppy fields of Flanders, Belgium, during the first World War.

Each flower’s four to six showy petals come in almost any color, though red is the traditional color that most people recognize. While many are solid in color, some do have unique markings, and their seed heads can also be used as an accent in cut floral arrangements. Their bloom time begins in the spring and ends in early summer, which means these perennial stunners are short-lived. Poppies make wonderful ornamental additions to any garden, but did you know they are also very important to the ecosystem? Poppy flowers are a major pollen source for bees.

This delicate flower has a complicated past. Some varieties of these bright blooms are a major source of opium, an extracted and processed narcotic drug containing powerful medicinal alkaloids. That said, the garden variety poppy for purchase through floral shops or garden isn’t the variety from which opium is extracted. Poppies also produce edible seeds that have been used since ancient times for a variety of medicinal purposes, as some varieties can contain small amounts of morphine and codeine. In modern times, commercially produced poppy seeds are sold in the spice aisle and often paired with lemon in quick breads, salad dressings, and other food items.

Despite the poppy flower’s colorful past, which has led to certain countries placing bans on them due to the opium poppy variety, this flower remains a strong part of the world’s history. There will likely always be some misuse of the flower, but that shouldn’t negate the impact it has had and continues to have on the world.

Poppies bring beauty and medicinal aid, as well as having a spectacular partnership with bees that helps make the world a much prettier place. We are particularly fond of the way these low-maintenance blooms pair with allium, columbines, and irises. Next time you stop in, ask a Lilygrass designer about poppies in your favorite colors!