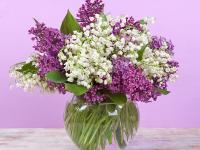 The Latin term for lilac is syringa vulgaris, which means lilac or common lilac, though this flower is far from common. Lilacs are known for their beautiful little flowers that bud in thick bunches on the end of each stem. They originated from the rocky slopes of the Balkan Peninsula, but they have been cultivated and naturalized in both Europe and North America. A member of the olive family, Oleaceae, the scent of lilacs has become a cultural staple and is used in everything from perfume to candles to healing oils.

Lilacs actually hold a place in Greek mythology as well. It was believed that the god of forests and fields, Pan, was desperately in love with a wood nymph called Syringa. His love was unrequited and the nymph hid from him in the forest by turning herself into a lilac. In his pursuit of his love, Pan stumbled upon the lilac shrub and cut the hollow reeds off to make the very first flute, never realizing what he had done to his love.

Ancient Celts believed that lilacs were magical due to the intoxicating scent and Russians believe that holding a lilac over a newborn will bring wisdom. During the Victorian era, the lilac was a sign of an old love, which is why widows would often be seen wearing them.

The flower is also closely tied to the Easter holiday because it has one of the earliest blooming time and is a symbol of spring and renewal. The early bloom time helped make them a staple in springtime events like graduations and weddings.

Lilacs can vary in color, and each color has a specific meaning. White lilacs symbolize purity. Violet symbolizes spirituality. Blue is a symbol of happiness and tranquility. Magenta represents love and passion, while the traditional light purple is a symbol of a first love.

Lilacs have inspired artists and lovers across the ages and can be seen all throughout history in paintings, poems, and pictures. The most famous representations were done by painters Van Gogh and Claude Monet. Walt Whitman also referred to the flower in one of his poems, “When Lilacs Last in the Door-yard Bloom’d.”

So whether you’re celebrating love, life, or achievement, you can never go wrong with adding lilacs to a mixed bouquet.