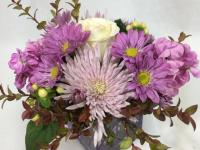 Chrysanthemums, commonly called mums, are the queen of fall flowers, and they come in many varieties and colors.

Mums can be traced back to the 15th century B.C. in China. They made their way to Japan in the 8th century A.D., where the emperor adopted a single chrysanthemum as the crest and official seal. It’s still a highly revered flower throughout Asia today.

In the 17th century, the mum appeared in the Western world. Karl Linnaeus, a Swedish botanist, combined the Greek words chrysos, meaning gold, with anthemon, meaning flower, to give the chrysanthemum its name. The flower was introduced to the United States during colonial times and quickly grew in popularity.

Mums are part of the Asteraceae family, which includes more than 23,000 species of flowers, including sunflowers and daisies. There are so many varieties of mums that it’s hard to identify them all. There are single mums, pompom mums, spider mums, and many more that can add color and fullness to any cut bouquet.

Color options include pale pink, pale or deep purple, crimson, bright yellow, white, orange, and brown. In many areas of the United States, mums are closely associated with homecoming festivities at high schools and colleges. Homecoming mums are often gifted to girlfriends and mothers and feature a large flower with ribbons, charms, bells, and even stuffed animals.

In the United States, mums are used throughout the year in cut floral bouquets and as landscaping plants in the fall. It’s the official birth flower of November and is the largest commercial produced flower in the country. However, in many European countries, the mum is known as the death flower and is used exclusively for memorials and funerals in some areas.

Want to include chrysanthemums in a mixed bouquet? Call us today to discuss the colors and other flowers you want to include. What you envision, we make a reality!