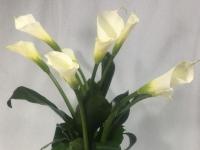 Calla lilies are a beautiful and stunning flower often used in wedding bouquets and romantic arrangements, but they’re not actually lilies or callas. So why exactly are they called calla lilies if they’re neither of those?

The flower was first catalogued in the 1700s, and the botanist made a mistake when naming the flower. A later botanist discovered the error and reclassified the flower into the proper genus and family, but the name was already well established, so the name stayed the same. The calla lily is in the same family as caladium and philodendron, and it’s sometimes also referred to as a pig lily, trumpet lily, or arum lily.

The name calla lily comes from the Greek word for beauty, and it certainly fits the flower. Like many flowers, the calla lily has religious symbolism and is often shown in paintings and other works of art with the Virgin Mary. It’s also commonly used for Easter flowers, and thus is seen as a symbol of holiness, faith, purity, and rebirth.

This range of symbolism is why calla lilies are popular for both weddings and funerals. Because of their long use at weddings, they’ve also come to symbolism devotion and marital bliss. For funerals, calla lilies represent sympathy and purification of the departed soul.

Calla lilies originated in South Africa, where the tropical climate allows them to grow year round. The actual flower of the calla lily is the center spike, while the colorful portion is a modified leaf rather than a flower.

When you want to add a little flair to a floral arrangement, calla lilies are a great option to choose.