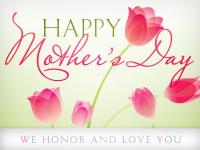 I hope you have all had a great weekend outside with those beautiful temps! I have a mild sunburn from running around all day Saturday. I had so much fun!

This week I want to talk about Mother's Day, which is this Sunday on the American calendar. Mother's Day is celebrated each year on the second Sunday in May. Anna Jarvis created Mother's Day in 1908, and it became an official holiday in 1914. Fact: Ms. Jarvis later became upset with the commercialization of the holiday and spent her last several years attempting to remove the holiday from the calendar.

Historically speaking, the celebrations of mothers began in ancient Greece and Rome. Many other countries celebrate mothers; in fact, Ethiopia has a multiday festival every year where they gather to sing songs and have a huge feast. Sounds like my kind of party!

"The roots of the modern American Mother’s Day date back to the 19th century. In the years before the Civil War (1861-65), Ann Reeves Jarvis of West Virginia helped start “Mothers’ Day Work Clubs” to teach local women how to properly care for their children. These clubs later became a unifying force in a region of the country still divided over the Civil War. In 1868 Jarvis organized “Mothers’ Friendship Day,” at which mothers gathered with former Union and Confederate soldiers to promote reconciliation.

Another precursor to Mother’s Day came from the abolitionist and suffragette Julia Ward Howe. In 1870 Howe wrote the “Mother’s Day Proclamation,” a call to action that asked mothers to unite in promoting world peace. In 1873 Howe campaigned for a “Mother’s Peace Day” to be celebrated every June 2. Other early Mother’s Day pioneers include Juliet Calhoun Blakely, a temperance activist who inspired a local Mother’s Day in Albion, Michigan, in the 1870s. The duo of Mary Towles Sasseen and Frank Hering, meanwhile, both worked to organize a Mothers’ Day in the late 19th and early 20th centuries. Some have even called Hering “the father of Mothers’ Day.”"

Anna Jarvis was the daughter of Ann Jarvis, and after her mother's passing, she began a huge letter writing campaign to various newspapers and politicians, alleging a disparity between holidays for men versus holidays for women.  Her efforts finally paid off when Mother's Day was added to the calendar as a national holiday in 1914. Interestingly, Anna never married or had children.

Traditionally, mothers have been showered with flowers and other gifts for Mother's Day. Whether you choose cut flowers, a lovely potted plant or another amazing gift for the deserving mother in your life, I hope you will stop by Lilygrass to see all we have to offer. I am confident we have something to please you and the special mothers in your life!

And remember, even if your mother is out of town, we can help! Just stop by or call today and we will get your flowers ordered and delivered by Mother's Day.

To my mom: Thank you for being the best mom a woman could ever dream of. You have supported me in any venture, instilled in me a great work ethic, and taught me how to be a lady. I am so thankful and blessed to call you mom. I love you!

Happy Mother's Day to all!