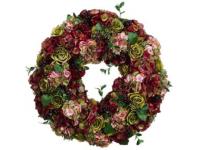 Lilygrass flowers and decor has always been know for their wreaths for all seasons.  We make custom wreaths for clients and always have a variety around the store.

I was wondering how the wreath came about in the past and found great information online.

The wreath has a long history and many religious associations dating back to the ancient cultures of the Persian Empire. Originally, the circlet was called a "diadem" and took the form of fabric headbands which were sometimes adorned with jewels. Beginning in 776 B.C., wreaths made of laurel leaves were used to crown victors of Olympic Games. Later, when the Games began to move to different cities, each host city would award head garlands made of branches of local trees.
Exactly when the transition from head ornament to wall decoration occurred is unclear. It is likely that celebration attendees simply hung the leafy headbands on their walls as souvenirs. Today, beautifully decorated wreaths are not only an integral part of the December holidays, but they're popular throughout the year, decorated to fit each season.
Perhaps the loveliest use of this symbol is the Advent wreath. Although its true origin is not know, some believe it was inspired by the Swedish Crown of Lights, a candle-bearing crown worn by young Swedish girls on St. Lucia's Day. St. Lucia was a young Christian martyr who gave her entire dowry to the poor.

The making of wreaths is an ancient and honored art that began about a thousand years before the birth of Christ.  The Christmas Wreath symbolizes the strength of life overcoming the forces of winter.  In ancient Rome, people used decorative wreaths as a sign of victory and celebration.  the custom of hanging a wreath on the front door of your home probably came from this practice.  At Christmas, the wreath is symbolic of Christian immortality.  The circle and the sphere are symbols of immortality.  The use of evergreens and wreaths as symbols of life was also an ancient custom of the Egyptians, Chinese, and Hebrews among other people.

The use of evergreens for Christmas wreaths and other decorations probably arose in northern Europe, Italy and Spain in the early 19th century.  The traditional colors of Christmas are green and red.  Green represents the continuance of life through the winter and the Christian belief in eternal life through Christ.  Red symbolizes the blood that Jesus shed at his crucifixion but for most of the 20th century, the word "wreath" conjured up visions of rings of evergreens with red ribbons hung on doors at Christmas.  The traditional Christmas wreath is hung anytime from right after Thanksgiving to mid-December and left hanging through the winter months.

In the early days in Europe, people would put wreaths on their doors to identify their home in the same manner that house numbers are used today. Each house would have a different wreath made of quite exotic flowers, most likely grown by the home owner right on their own land. Today, wreaths are a common custom with a different wreath for each season.